Request for convening timely DPCs and repatriation of JTS / PS Gr. B officers to Home Circle.

Following is the letter to directorate on DPC and repatriation issue. If any change is required. Please comment.
Postal Officers Association many-a-times brought to the notice of Directorate about non convening of timely DPCs in JTS  and non posting of STS officers against vacant post in circles years together placing burden on officers holding  joint charge without substantial benefits that too in contravention to DoP&T instructions.  In Circles where joint charge is not agreed, PS Gr. B officers are officiating against these posts creating resultant vacancies in Gr. B varying from Circle to Circle and imbalance thereof up-to lowest rung affecting timely promotion in each cadre and repatriation of deserving PS Gr. B officers to their home circle. So much so process of the DPC for the promotion to the cadre of PS Gr. B cadre for 2018-19 has not commenced till now and regular DPC for the year 2017-18 is also overdue.
Many-a-times, adverse position occurs where the approved persons of a particular circle are made to work outside their parent circle, while there exists resultant vacancies in their own parent circle due to officiating of number of incumbents on Group A posts for longer duration. This is also creating legal complication when punishment orders passed by officiating officers are challenged in the court of law seeking relief of legal provision of not passing orders by competent authority.
Now directorate has made promotions to the cadre of Postal Services Group “B” under 19% and 6% promotion quota by calculating vacancies from the total strength of Group B for Recruitment Years 2012-13 to 2016-17 creating confusion of seniority etc. within cadre upsetting the already settled position under each quota i.e. 649 posts for seniority cum fitness promotional quota, 165 posts for promotion through LDCE quota and 52 posts earmarked for general line officials. This will not only diminish the promotion chances for a particular quota to JTS cadre but also create other legal complications by silting all the vacancies towards LDCE quota. Now, you can well imagine the plight of so called back bone of the department who were waiting for their due promotion and now will have to suffer frustration even after retirement or for another long period without any charm in the cadre particularly officers coming through 75% quota.
It is therefore once again requested to your kind honour to pass orders to convene pending JTS DPC without further delay and issue repatriation orders of PS Gr. B /JTS officers to their home circle against resultant vacancies up to June-2018. The newly promoted PS Group B officers may kindly be posted in their parent circle if still vacancies exists otherwise they may kindly be adjusted in neighbouring Circles.
Posted by Postal Officers' Association(India) at 3:34 PM 2 comments: Links to this post

APPEAL TO WEAR KHADI ONCE A WEEK 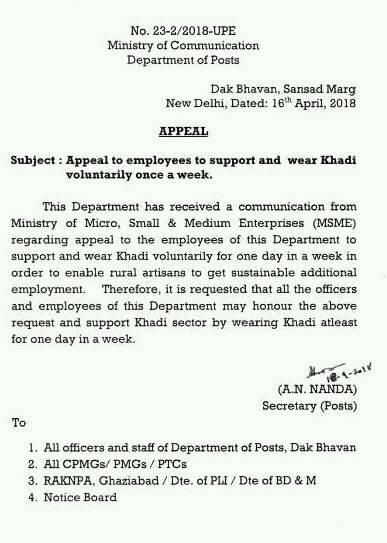 Posted by Postal Officers' Association(India) at 12:22 PM No comments: Links to this post

Posted by Postal Officers' Association(India) at 4:39 PM 3 comments: Links to this post

http://utilities.cept.gov.in/dop/pdfbind.ashx?id=2781
Posted by Postal Officers' Association(India) at 3:52 PM No comments: Links to this post 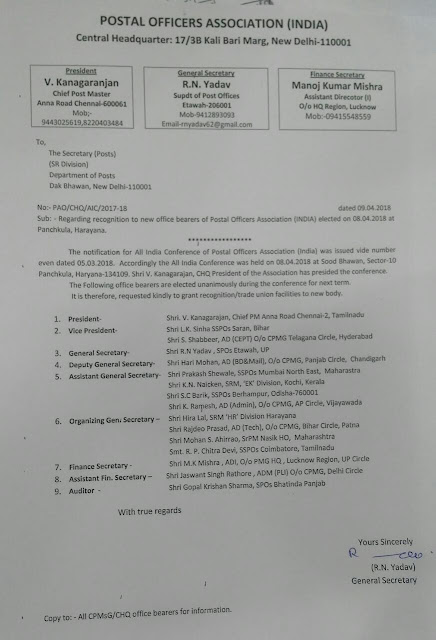 ALL INDIA CONFERENCE ENDS WITH GRACE

ALL INDIA CONFERENCE ENDS AFTER PASSING FOLLOWING RESOLUTIONS:
To urge Secretary Post to convene early DPC for promotion to JTS cadre.
Remove disparity between counting of service for promotion in JAG irrespective of mode of selection in JAG Cadre.
Provision of assistance of stenographers to all PS Group B officers
Providing inspection vehicle to RMS divisions and SP(HQ) ,deputy SP allotted inspection work.
Finalize or revisit the inspection questionnaire in the backdrop of technology advancement with clear fundamental fixed priorities to be carried out.
Grant 2% allowance to the officers holding double charge or on attaching more than three new projects.
Convert all Manager MMS posts into non technical and designate these as Group B posts.
Grand of NFGP at every level of hierarchy after 4 years of service.
Besides,
filing court cases for grand of  GP of Rs.5400/- on completion of four years of service in GP of Rs. 4800/- promoted prior to 1-1-2016.
another case demanding relief for fixation of pay of PS Group B officers by replacing the pay structure pay band and grade pay with corresponding pay level/cells in pay matrix.
Organisational/ cadre restructuring  is the other issue to be taken up. 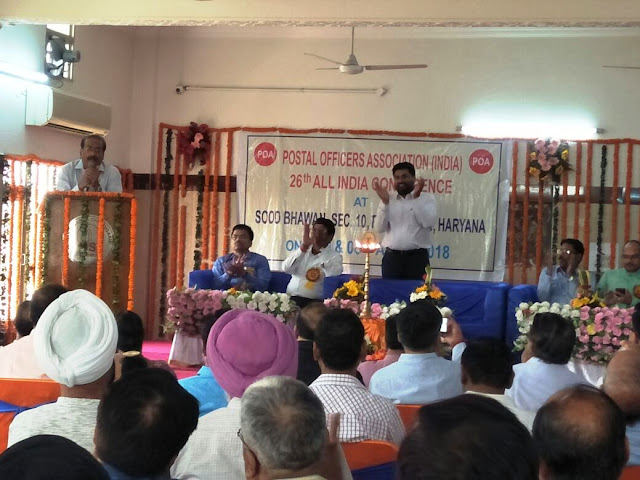 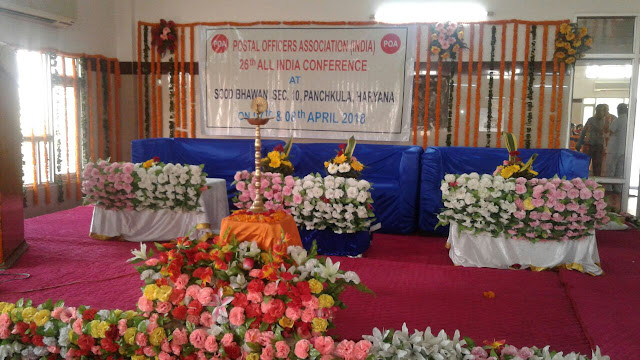 Posted by Postal Officers' Association(India) at 10:34 PM 2 comments: Links to this post

Web site of others